This is a group project developed by Jimin Wen and me.

This project is to implement a Tiny-SQL interpreter. It is written in Java. In this report, first, the software architecture of this database management system is introduced; second, various optimization techniques implemented are illustrated; third, results and performance for experiments on the two test files are discussed. The first test file is the one included in the course project resources and the other is more realistic data from our course project 1. This program is able to perform basic SQL commands based on TinySQL grammar defined by the project introduction. Data structures such as heap, expression tree are created for sorting and expression evaluations. Algorithms like one-pass, two-pass are also implemented for specific usage. Furthermore, optimization techniques for select attributes push-down, natural join and table reordering based on size for join operation are also introduced in this program in order to speed up the execution.

The project code can be found at https://github.com/melonskin/tinySQL.

The program has been compiled with Maven. To run the program, just cd to the project folder and type following command:

The overall software architecture of this database management system consists of an user interface, a parser, physical query module and storage manager and other helper modules for internal processing. The logic query discussed in the textbook is not explicitly implemented as a module and instead, the logics are implemented in those internal modules.

The text interface used in our program is a command line tool able to take user TinySQL command in and process the SQL command and print the results on the screen. It can also process a text file consisting of a series of tinySQL commands.

User can either choose to type the SQL command in the command line and execute the lines one by one. Or they can choose to process file input, here the command use to do a file execution is source absolute\path\to\filename.txt, in which the filename.txt is the input file to be processed, the output is directed to the screen. Notice that absolute file path is used, since it’s more flexible for users. 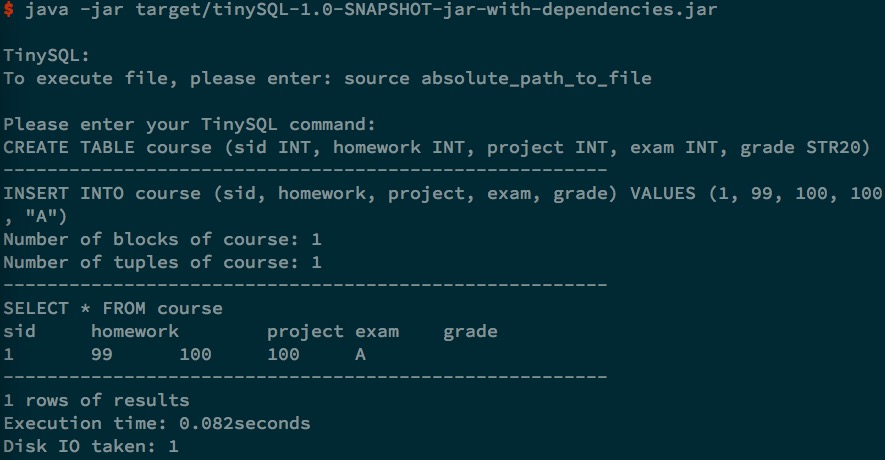 The parser used various parser method to parse the SQL queries and output the parser tree to be executed by the physical query plan.

Physical query part will take the output of the parser as its input. It includes methods for execution of DROP, CREATE, INSERT, SELECT and DELETE. For the CREATE and DROP queries, no recursion is involved in the execution, thus the implementation is pretty straightforward. Just call schemaManager to do the job.

For INSERT, new tuple is created based on the attribute values provided. It will be append the the relation then. NULL values is handled properly. There is a corner case when we need to insert the selected result from SELECT query. It can also be processed easily once we get the SELECT part done.

Both SELECT and DELETE query can have a WHERE clause to specify the condition.

The idea of deletion is we take relation blocks in main memory. Check if the tuples inside meets the condition if there is one. Do invalidate the tuple if it satisfies the condition or there is no condition. Then put those blocks back into disk.

Notice that, the operation will create possible holes in disk. In order to handle it, the program will do two pass sort to remove holes and shrink the number of relation blocks.

For single table case, if the query doesn’t contain DISTINCT or ORDER BY, we can just one pass to go over all tuples and filter those satisfying condition.

If we do have DISTINCT or ORDER BY, but the table size is less than or equal to the main memory capacity, we can take all tuples from disk into main memory, then do one pass sort based on order-by attributes or selected fields. Finally, output the tuples in order (remove duplicates if required).

If we do have DISTINCT or ORDER BY, but the table size is larger than the main memory capacity, we cannot put entire table into the main memory. However, we still need to sort the table. We do two pass sort based on order-by attributes or selected fields as described in class. The tuples stored in disk will be in order. Finally, output the tuples in order (remove duplicates if required).

The two pass sort algorithm is implemented by heap and merge-sort algorithm. It can also delete possible holes in disk.

For multiple tables case, we need to join those tables. The basic algorithm is join two tables. Two technique are implemented: cross-join and natural join.

We implement three optimization techniques to speed up the execution. The first one is pushing down the selection in the expression tree. The second strategy is to use natural join instred of cross join when applicable. The third one is reordering the tables based on table sizes while joining more than 2 tables.

The sizes of the tables used in the experiment are listed as below.

We will compare the performance of two same queries but with different join techniques, natural join and cross join. The two queries are as below. Cross join of another case is also included.

We can see that natural join reduces the disk IO dramatically.

The performance of 4 given queries is shown as below.

We use a 200-tuple 3-field table from project 1 as dataset to test our program. The queries and performance are shown as below. Four statements marked as A, B, C, D were tested. The time taken and disk IO were recorded in the table below. 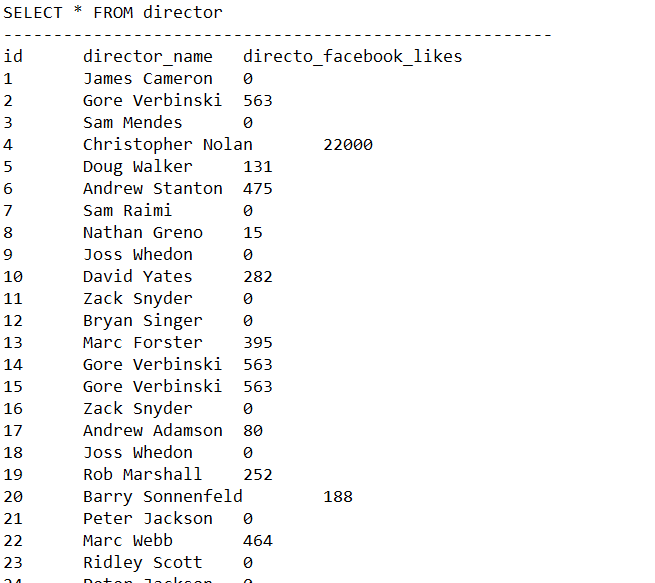 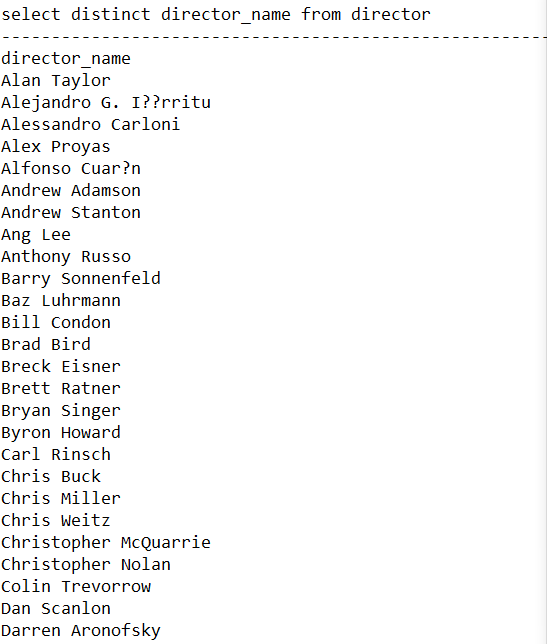 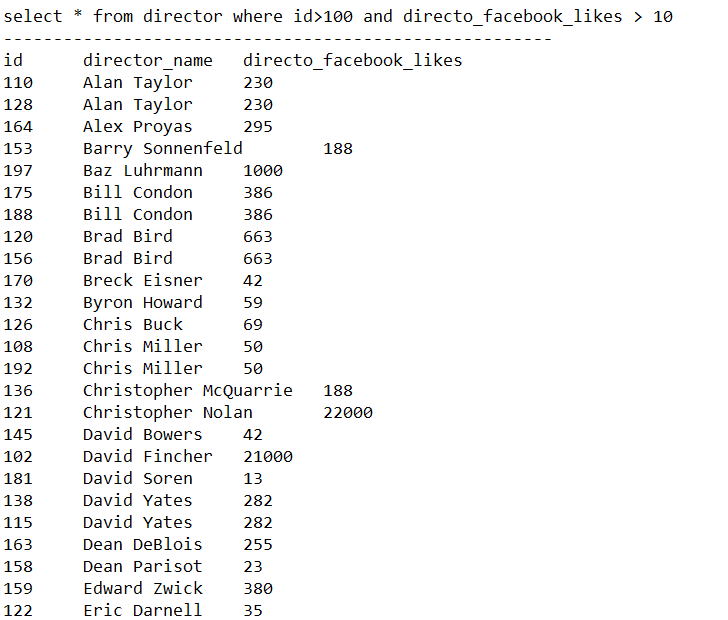 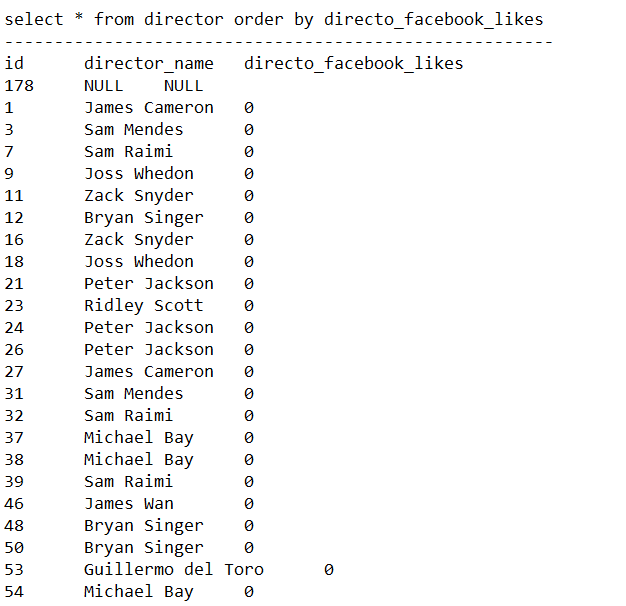 To get a deeper analysis on the performance of tiny-SQL on the commands above. We tested it with increasing number of tuples and get the graph showing the change of running time and diskIO to analyze the performance. 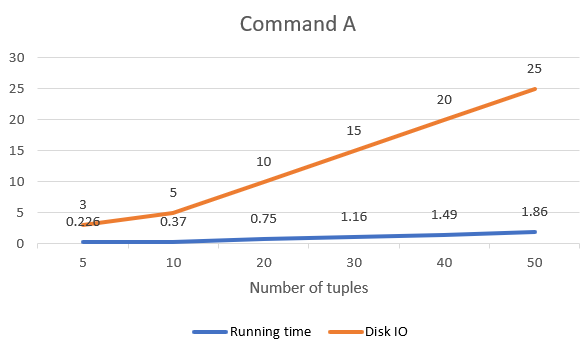 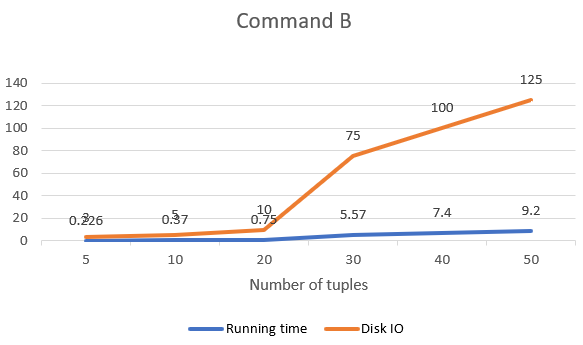 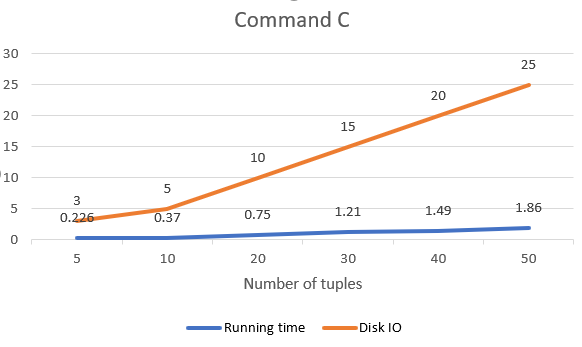 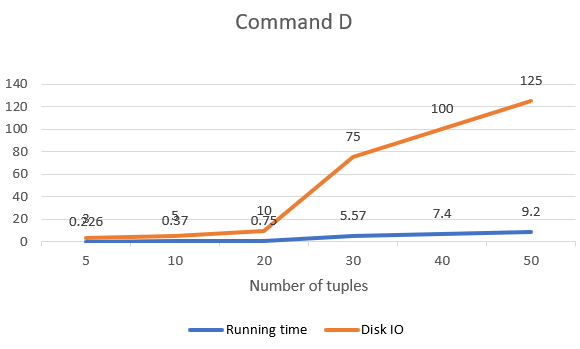 As it could be found, the graph of command A and C generally follow linear relationship. That is because A and C read in records by tuple. The cost of disk IO is linear to the number of tuples of a relationship.

Command B and D shows a obvious steeper gradient when the number of tuples is larger than 20. That is because when the relation size is larger than the main memory. It could not be read into main memory by once when doing sorting and duplicate elimination which is based on sorting.

This program can execute tinySQL queries specified by tinySQL grammar provided. Various data structures and algorithms are implemented in order to perform queries, such as heap, expression tree, one pass and two pass algorithm and natural join, etc. Furthermore, two optimization techniques are applied to speed up the execution. One is to push selection down; the other is to rearrange table join order. The purpose of both techniques is to reduce the size of temporary table size.

Copyright claim: TinySQL, a SQL interpreter implementation is created by melonskin on 2018/04/17. Its copyright belongs to the author. Commercial usage must be authorized by the author. The source should be included for non-commercial purposes.
Link to the article: https://amelon.org/2018/04/17/tinysql.html

Melon blog is created by melonskin. This work is licensed under a Creative Commons Attribution-NonCommercial 4.0 International License.
© 2016-2020. All rights reserved by melonskin. Powered by Jekyll.