The link utilization of rdt3.0 is low. We can improve it by pipelining, sending multiple unACK’ed packets at any time.

TCP segment format is as below. 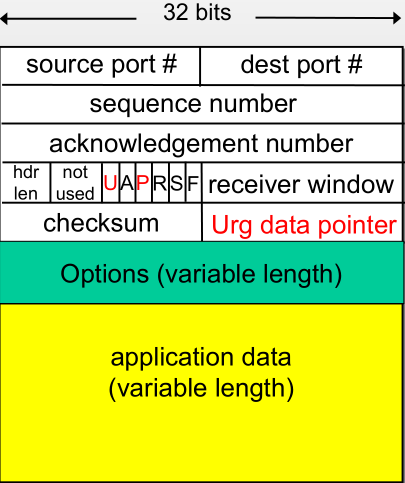 Sender won’t overflow receiver buffer by transmitting too much, too fast

Congestion is the case when too many sources sending too much data too fast for the network to handle, not the receiver (in the case of flow control).

Various of algorithms have been developed over the years.

TCP Tahoe only responds to timeouts.

Initial slow start ends when either:

Rate is , is the current window size. Average rate is .

Between two losses, number of packets sent is:

Denote loss probability is , Therefore, we have:

The average rate can be calculated again to be:

Fairness goal: if K TCP sessions share same bottleneck link of bandwidth C, each should have average rate of C/K.

TCP will converge to fairness eventually, in the case that flows have the same MSS/RTT.

Nothing prevents app from opening parallel flows between 2 hosts. Can use this strategy to obtain larger share of bandwidth. Web browsers do this.

Multimedia apps do not use TCP; they use UDP instead. Because they don’t want rate throttled by congestion control.

This is my class notes while taking CSCE 612 at TAMU. Credit to the instructor Dr. Loguinov.

Copyright claim: TAMU Computer Networks 3 Transport Layer is created by melonskin on 2018/04/24. Its copyright belongs to the author. Commercial usage must be authorized by the author. The source should be included for non-commercial purposes.
Link to the article: https://amelon.org/2018/04/24/network-tamu-03.html

Melon blog is created by melonskin. This work is licensed under a Creative Commons Attribution-NonCommercial 4.0 International License.
© 2016-2020. All rights reserved by melonskin. Powered by Jekyll.