Spanner is Google’s scalable, globally-distributed database. It shards data across many sets of Paxos state machines spread all over the world. Data is also replicated to support availability and geographic locality. To balance load or respond to failures, data can be re-sharded or migrated automatically according to data or server changes.

Most applications favor lower latency over higher availability, thus they use less datacenters for replication (3 to 5 across US), as long as they can survive 1 to 2 datacenter failures.

Comparison with other Google databases:

These features are enabled by the fact that Spanner assigns globally-meaningful commit timestamps to distributed transactions, which reflect serialization order. If a transaction T1 commits before another transaction T2, then T1’s timestamp is smaller than T2’s.

The key enabler is TrueTime API. It directly expose clock uncertainty (generally less than 10ms). If uncertainty is large, Spanner slows down to wait out that uncertainty. The API implementation is using both GPS and atomic clocks.

Note: Example of how the TrueTime helps. Say we have 2 nodes A and B and 2 transaction T1 and T2.

With TrueTime, uncertainty 15 (larger than the difference of server timestamps):

Note: Vector clock is another method solving this. Now a clock is represented as a vector <ts1, ts2, ..., tsn>. n is the number of nodes. In case of two nodes, the clock vector is <ts1, ts2>. The following example shows that the clock vectors reflect actual serialization order as well. However, we may have too many nodes in Spanner group, thus cost could be huge to store, write and transport the vectors. We can understand why it’s not used in Spanner. This vector clock may sound similar to Lamport timestamp, but better. Lamport timestamp can enforce total order, but cannot describe concurrent events well. Vector clock records timestamps on all nodes to represent such causality.

A Spanner deployment is called universe, which can be global. Currently, there are 3 universes: test/playground, dev/prod and prod-only universes.

Spanner is organized as a set of zones. Zone is the unit of administrative deployment; location across which data can be replicated; unit of physical isolation. For physical isolation, one datacenter may have multiple zones as different applications’ data must be partitioned across different sets of servers in the same datacenter. Zone can be added or removed, as datacenters added or turned off.

The Spanner servers are organized as below. 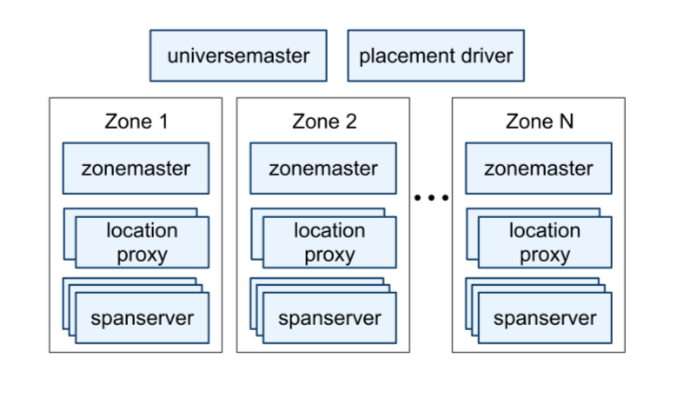 The spanserver is organized as: 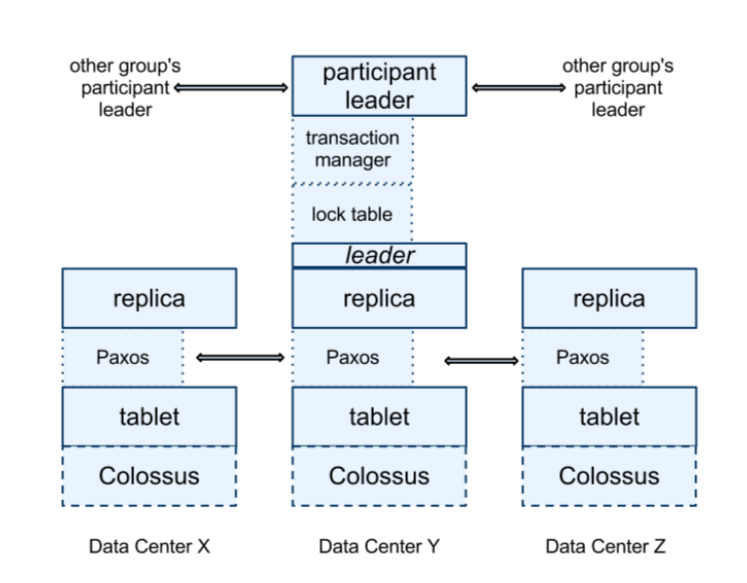 Directory is a bucketing abstraction of a set of contiguous keys that share a common prefix. Applications can use directories to control the locality of the data by choosing the keys carefully.

Example of a database schema:

TrueTime uses both GPS and atomic clocks as time references. They have different failure modes; thus can compensate each other.

Define instantaneous error bound as , which is half of the interval’s width. Average error bound is .

These features enable a guarantee that a whole-database audit read at a timestamp t will see exactly the effects of every transaction that has committed as of t.

Serving reads at a timestamp

When multiple Paxos groups are involved:

2PC adds an extra network round trip so it usually doubles observed commit latency. It scales well up to 10s of participants, but abort frequency and latency increase significantly with 100s of participants. (This is from F1 paper.)

Copyright claim: Read "Spanner, Google's Globally-Distributed Database" is created by melonskin on 2019/07/06. Its copyright belongs to the author. Commercial usage must be authorized by the author. The source should be included for non-commercial purposes.
Link to the article: https://amelon.org/2019/07/06/spanner-paper.html